Other company’s try to do what we do. But ALB Consulting gets the job done or your MONEY BACK!!

ALB Consulting is Your Radio Airplay Promotion Experts is not only a music submission service where we digitally deliver your next single directly to key radio station programmers and disc jockeys, but a GUARANTEED AIRPLAY SERVICE. Does this sound too good to be true? Unlike many others who simply just service your music, we GUARANTEE IT WILL ACTUALLY GET PLAYED! How are we able to do this? ALB Consulting has maintained strategic partnerships with radio station owners, program directors and disc jockeys in order to GUARANTEE that your music is not just HEARD by them, but PLAYED by them! The strong relationships that we have developed over the years have allowed us to market and promote songs within the radio broadcasting community at all levels (Internet, Satellite, College and Terrestrial Commercial FM Radio) SUCCESSFULLY. As a client of ALB Consulting Service, you too can start receiving real radio airplay within the next 48 hours!!

ALB Consulting markets its client’s music to all levels of radio, which include Internet (Tunein, Streema, Live365, Shoutcast, IceCast, Radionomy, iTunes Radio, OnlineRadioBox, Dash Radio, Radio.net, Internet-Radio.com, Pandora, iHeart Radio, On Demand Radio Broadcasters), BBC Radio, Satellite (Sirius XM & Music Choice), College and Terrestrial Commercial FM Radio (Major FM – BDS / Mediabase Reporting Stations). Although our primary focus is monitored stations, we also service your music to an array of Non-Commercial, Activator and Non-Reporting radio stations to ensure maximum exposure! Our competitors advertise that they will service your music to thousands of radio stations and secure radio airplay. This is IMPOSSIBLE because that many stations do not exist for any ONE particular format of music. We however, simply GUARANTEE RADIO AIRPLAY for our clients on legitimately monitored radio stations that are verifiable by third party companies. These stations report radio airplay to music monitoring companies such as BDS (Broadcast Data Systems), Mediabase, and DigitalRadioTracker.com. In addition, they pay royalties to performance right societies such as SOUNDEXCHANGE, ASCAP, BMI, and SESAC as well as report to various industry trades such as Billboard, FMQB, DRT Top 200, DRT Top 150 Independent Charts, World Indie Music Charts, Texas Country Music Worldwide, Cashbox, Recordworld, BRE, Hits and many others!

WHY GETTING YOUR MUSIC ON THE RADIO IS SO IMPORTANT.

Making your mark in the music scene takes talent and a lot of exposure. In an arena of unique flairs, finding the best seat is a challenge.
Traditionally, musicians find solace in the fact that the radio exists to their advantage. For decades, people depended on the radio for new music. But a significant shift happened when the internet came to life.
An arsenal of songs from artists around the globe became accessible in just a few clicks.
Many people think that the radio has completely taken a backseat in delivering new music to the public. We bet not. Getting your music on the radio is still so important. Do you want to know why? Here are a few reasons:

Radio is not dead.

Radio may have taken a quick holiday in the setting of new trends in music, but it continues to make strides in helping aspiring musicians introduce new music to the public.

A report by Nielsen for the second quarter of 2019, for example, found that “the national radio audience hit an all-time high for the second year in a row.” The report revealed that around 245 million Americans are tuned into radio for a given week. This covers a whopping 91% of the American population, a market that excites advertisers.

Radio stations stick to a program schedule. Each program is curated based on a particular genre. This gives your music a consistent spot for repeated exposure for weeks or even months! Isn’t it amazing? Here are other awesome perks radio has for you when it comes on to exposure:

• Having a DJ as a host for a program can also be beneficial for your music. By getting the DJ discuss your music briefly, your potential listeners have a better understanding of the art behind your songs.

• Unlike most streaming services, your music is less likely to be drowned in a pool of millions of albums. Once your music finds its way to the genre it belongs to, it stays there for an extended period of time.

As an artist, you know that branding isn’t exclusive to the goods we consume every day. You create a unique brand for your music as well. Having that brand stuck in the public’s head is another bonus radio can offer you. Here’s how:

• Radio actively pushes content to its audience. It successfully creates a familiar tune into the listener’s subconscious mind by airing repetitive series of songs corresponding to its scheduled programs.

• DJs, as music curators, aid in creating the public’s brand awareness for your music. They can talk about your music during their programs. They can also invite people to listen to your songs during live performances.[/vc_column_text][/vc_column_inner]

MUSIC REAL ESTATE / ALB CONSULTING is a radio airplay marketing organization which consists of a team of music industry promotion veterans with over 100 years of combined music-marketing experience. As one of the music industry’s leading radio airplay marketing firms, our mission is to level the playing field for the independent record company or new developing recording artist by giving their music an opportunity at receiving real radio airplay. We strategically formed our team to assure this mission is accomplished! Unlike our competitors, MUSIC REAL ESTATE has created strong strategic partnerships with radio station owners, program directors and disc jockeys in order to guarantee that your music is not just HEARD by them, but PLAYED by them. MUSIC REAL ESTATE and its Affiliates are in the position to offer our clients a “guaranteed radio airplay” service at an affordable rate as a way to test market records for true viability.

MEET SOME OF THE ARTISTS ALB CONSULTING HELPED GET TO THE NEXT LEVEL!!

IS YOUR MUSIC GETTING HEARD LIKE THIS? BIG UP TO ALPHA THOUGHT FOR KILLING THE GAME WITH ALB… WE GET YOUR MUSIC HEARD ALL OVER THE WORLD!

Anthony Siddiq Bryant began in the music \ entertainment industry in1998 as an operations manager and executive producer for The Whispers and Howard Hewitt concert in Delray Beach Florida. His next event which he solely produced was the hugely successful 1998 Miami Hip Hop Festival where he booked and worked with hip hop greats like DMX, Onyx, Dougie Fresh, Lost Boys, Das EFX, Special Ed and Foxxy Brown he also went on to co-manage highly successful 70’s r&b soul group The Intruders who toured in concert with other highly successful 70’s r&b soul groups Blue Magic, Delphonics, Rose Royce, Black Ivory and The Persuaders.
He created ALB Consulting Service official FM radio brokers and works in conjunction with SugarWaterRadio and is highly and tirelessly dedicated to promoting and advancing new artist in their music careers.
About Us
ALB Consulting Services is a new company with a creative alternative for independent artist and/or independent record labels to help promote and advance your music career. How do we do this? By getting your music FM radio play nationwide in small or large markets. We also have affordable campaigns to fit the new upcoming artist budget. Every artist and/or company will receive guaranteed spins according to the campaign that they invested in. Every artist and/or company will also receive a tracking report that shows what radio stations are playing your music and the amount of listeners that
are tuned in. Let ALB Consulting Service give your music a voice. What is great music if no one can hear it? You create the music, We created the opportunity! ALB Consulting Service guarantees our work.

CHOOSE YOUR PLAN. PICK A RADIO CAMPAIGN THAT BEST FITS YOUR NEEDS AND GOALS. ALL PLANS OFFER A FULL MONEY BACK GUARANTEE.. 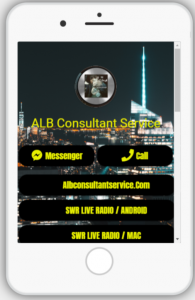 ALB CONSULTING has teamed up with one of the best Internet radio station in the game {SugarWaterRadio.co}. From Hip Hop and RnB and Much more… We made sure we made it very easy to get your music heard. See your music playing on Twitter evey time your music plays….Why support your local Radio station if they never spin your music? Got a Hit? Submit your Music Now. Our station is being listened to Right Now from people all over the world and  Major Label Execs, A&R’s, Talent Seekers, Booking Agents, and All The Major Music Taste makers. We Break Artist all day! Get Your Music Heard!

Using ALB CONSULTING SERVICES FM Radio and DTR music play service. MUSIC REAL ESTATE offer a 100% money back guarantee if an initial tracking report has not been provided for your submission. An initial tracking report will be received no later than the first Wednesday after the 3 business day processing period `{`i.e. if you submitted on Monday the 1st, your initial tracking report will be received no later than Wednesday the 10th`}`. Tracking will continue every week for the duration stated in your package. Once the initial tracking report has been received payment is non-refundable. All funds are due at time of sale. Applicable Georgia State sales taxes apply. Neither our service nor your representatives are responsible for your promotion or for your professional success. By submitting this music you are declaring that you have the rights to the music and assume all responsibility for any or all claims to the music.
There is a small digital transaction fee of 3.0%

Do you want more from life – more money, more freedom, more security, and more time for the activities you love?

If you’re like me, to save a few bucks by cutting back on things you love makes you want to jump out of a window. Please, stop with the BULL AND BECOME YOUR OWN BOSS.
While you’re scrimping on the things you love, you see other people enjoying the financial freedom doing the things they love… and they never have to choose between paying bills, automatically saving for their future, or living a Rich Life.
If you’re ready to stop saying “no…no…no” and start living like a BIG BOSS. The life you want, you need to embrace this truth and change the way you think…